What is a Regional Growth Strategy?

A Regional Growth Strategy (RGS) is a strategic plan adopted by the Regional District of Nanaimo (RDN) Board that defines a regional vision for sustainable growth. It is a commitment made by affected municipalities and regional districts to a course of action involving shared social, economic and environmental goals.

The RGS aims to establish a more sustainable pattern of population growth and development in the region over a twenty-five year period by encouraging and directing most new development in the region within designated Growth Containment Boundaries [See: What is a Growth Containment Boundary?], thereby keeping urban settlement compact, protecting the integrity of rural and resource areas, protecting the environment, increasing servicing efficiency, and retaining mobility within the region.

What is a Regional Context Statement?

What is an Implementation Agreement?

An implementation agreement (IA) is a partnership agreement between a regional district and other levels of government, their agencies or other bodies which spells out the details of how certain aspects of a regional growth strategy will be carried out. For example, an agreement may relate to the construction and funding of new or upgraded highways, sewers, hospitals or regional parks.

What is the purpose of a Regional Growth Strategy?

The purpose of a Regional Growth Strategy (RGS) is to "promote human settlement that is socially, economically and environmentally healthy and that makes efficient use of public facilities and services, land and other resources". Ultimately, it is a coordinated plan to manage growth in the region in a sustainable manner.

What does a Regional Growth Strategy do?

The Regional Growth Strategy (RGS) commits the RDN and member municipalities to work towards a shared vision to manage growth more sustainably. The RGS establishes a regional pattern of land use by defining where future growth will occur and what lands will be protected to meet environmental, agricultural and resource goals. The RGS also provides direction to address a broad range of actions to improve the quality of life for present and future residents of the region.

The RGS sets the direction for Official Community Plans (OCPs) and other bylaws of member municipalities and the regional district. An OCP must include a Regional Context Statement, to describe how it either does, or will become consistent over time with the direction set by the RGS.

What does the Regional Growth Strategy NOT do?

A Regional Growth Strategy (RGS) is a high level policy document that provides the RDN and member municipalities direction to achieve a common vision for the entire region, with respect to addressing growth management challenges. These challenges include meeting future housing needs, mitigating climate change, environmental protection, economic development and transportation. The RGS does not directly regulate land use within member municipalities and electoral areas. Approvals for development remain the responsibility of each individual jurisdiction through Official Community Plans (OCPs) and regulations like zoning and subdivision bylaws.

Aside from requiring that OCPs include Regional Context Statements, the RGS allows municipalities flexibility with respect to how they choose to implement policies and be consistent with the direction set by the RGS.

Where does the Regional Growth Strategy apply?

The Regional District of Nanaimo covers an area of 207,000 hectares. Within this area the RGS applies to six electoral areas and four municipalities.

Electoral Areas Affected by the RGS

Municipalities Affected by the RGS The RGS does not apply to Gabriola, Decourcy and Mudge Islands (Electoral Area B) as they fall under the jurisdiction of the Islands Trust. The reserve lands of Qualicum, Snaw' Naw'As (Nanoose) and Snuneymuxw First Nations are also not included in this Growth Strategy. 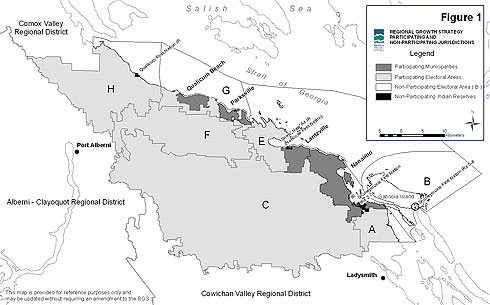 Why do we need a Regional Growth Strategy?

Our quality of life and resilience of our communities is affected by a range of activities that fall under the control of different jurisdictions. The Regional Growth Strategy (RGS) was adopted in response to the residents' concerns about the impacts of rapid population growth and development in the late 1980s and early 1990s. Given that the impacts of growth cross jurisdictional boundaries, it was recognized that a coordinated approach to community planning was necessary to effectively address growth management issues.

The RGS provides a framework for member municipalities and the RDN to coordinate growth management issues that cross municipal boundaries. The RGS also provides a mechanism to connect with provincial ministries and agencies who have jurisdiction in areas that impact land use and community planning and whose resources are needed to implement projects and programs. Inter jurisdictional coordination is essential to protecting our environment and achieving a high quality of life for present and future residents in the region.

When did the Regional Growth Strategy come into effect?

The first Regional Growth Strategy (RGS) was adopted in 1997 as the 'Regional District of Nanaimo Regional Growth Management Plan'. After its adoption and subsequent reviews, all affected local governments were expected to update their bylaws to reflect the goals and policies of the plan. According to the Local Government Act, a regional district must consider reviewing the growth strategy at least every five years. The plan was updated in 2003 and renamed the RGS. The plan was updated again in 2011 and is still in effect today.

Why is a growth strategy important for achieving goals related to sustainability?

Developing and implementing a Regional Growth Strategy (RGS) is essentially about creating more resilient, sustainable communities. The Local Government Act requires that a RGS go beyond addressing environmental issues to include other social and economic aspects of sustainability. Managing the growth of communities has implications for the efficient provision of services, economic development of communities, availability of affordable housing and effective stewardship of land and resources.

A strong component of the RGS is focusing growth into specific areas to avoid urban sprawl and promote settlement patterns that follow the principles of Smart Growth. The RGS establishes a pattern of land use intended to support the creation of Complete, Compact Communities.

Since 2008, Provincial regulations require RGS's to include targets for the reduction of GHG's and establish policies and actions with respect to achieving those targets. By influencing land use patterns and associated transportation choices, a RGS can have a major influence on reducing green house gas (GHG) emissions and mitigating the negative impacts of climate change. A regional growth strategy can also plan for future energy supply using alternate sources while also promoting the efficient use and conservation of existing resources.

What are the benefits of implementing the Regional Growth Strategy?

The Regional Board has adopted the Regional Growth Strategy (RGS) for several reasons. This includes "to encourage investment and development in designated urban areas, to keep urban settlement compact, protect the integrity of rural and resource areas, protect the environment, increase servicing efficiency and retain mobility in the region."

The challenges addressed by the RGS cannot be adequately undertaken by individual jurisdictions on their own. An important benefit of the RGS is that it provides a framework that encourages inter-jurisdictional coordination and cooperation between the regional district and municipalities to address regional issues that affect all local governments. This allows for more effective implementation to better address sustainability issues and economies of scale for undertaking projects jointly.

How is a Regional Growth Strategy Implemented?

The Regional Growth Strategy (RGS) is implemented through a variety of bylaws such as Official Community Plans (OCPs) and Zoning bylaws. RGS legislation requires that all bylaws adopted by the RDN and member municipalities must be consistent with the RGS. OCPs prepared by municipalities and the regional district must include a Regional Context Statement that specifies how the OCP either is or will become consistent with the RGS over time.

In addition to policies carried out through land use and community planning, other departments of the RDN will also implement the RGS through their own policies and programs (For example, Parks and Recreation, Regional and Community Utilities, Transportation and Solid Waste Services).

A review of the RGS must be considered every five years to ensure that the document remains relevant to the growth concerns of the region. The regional district must also continuously monitor the actions in relation to the implementation of the RGS, and prepare annual progress reports in regards to the implementation.

Who is involved in implementing the RGS?

The Regional District of Nanaimo (RDN) and all its member municipalities are collectively involved in implementing the RGS through developing local bylaws and participating in collaborative activities with other organizations whose support and cooperation is necessary to achieve RGS goals.

Must all Local Governments agree with everything in the Regional Growth Strategy?

Local governments may choose not to accept certain policies in a Regional Growth Strategy (RGS) if the Regional Board determines that it is not essential to the RGS that those policies apply to that jurisdiction. The condition would be that the RGS include a statement that the policy has not been accepted by the local government.

The RDN and member municipalities must make reasonable efforts to reach an agreement on the RGS content. If they are unable to reach consensus on an essential provision of the RGS, then the Minister of Community, Sport and Cultural Development is consulted to determine the most appropriate means for dispute resolution. The consultation with the Minister is deemed to be the last resort for the settlement of the RGS process, and the cost is incurred by the local governments involved.

What is the relationship between the Regional Growth Strategy and Official Community Plans?

While the Regional Growth Strategy (RGS) and an Official Community Plan (OCP) are separate documents, their content is interrelated. An OCP must work towards the purpose and goals of a RGS. As the two documents are both working towards achieving the same goals, one at the community level and the other at the regional level, an OCP is a means of implementing a RGS. Through the integration of RGS goals into an OCP and the translation of RGS policies into OCP policies, residents can work towards the desired future for the OCP area and also for the region.

What is the Growth Containment Boundary?

What is the Urban Containment Boundary?